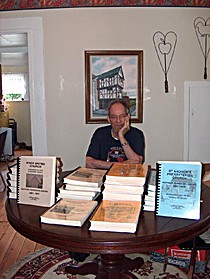 Om migALEX W FRASER, born 1940 in Charlottenburgh Township, Lancaster, Ontario, County of Glengarry, whose United Empire Loyalist ancestors settled in the area in 1784, attended school in Lancaster and Williamstown. After leaving High School he worked with Bell Canada for a few years. In 1967 Alex got ill while attending school in Ottawa, Ontario. During convalescence from this illness, in 1971, he was inspired to use his spare time to interest himself in the ancestry of his mother and his father. He began actively to pursue this quest by searching local records, visiting cemeteries, etc. It was in this pursuit that he realized the necessity to preserve headstone inscriptions, so set about to copy them in full. The interest and response people showed in his endeavour led to the publication of Gravestones of Glengarry Volume 1, Williamstown, in September 1976, Volume 2 in 1978. Volume 3 St Raphaels in 1988, Volume 4 Alexandria in 2008.

This effort in preserving local Glengarry County area history has kept him busy for the last 40 years. In this time period we have published over 23,000 pages of material on the Glengarry Stormont County Ontario Area.

Mr. Fraser has been genealogist for the Glengarry Historical Society, the genealogist (Glengarry County) & founding member for the St Lawrence United Empire Loyalists Branch of Stormont, Dundas and Glengarry. He was also the 1st host for the counties of Glengarry, Stormont, Prescott Ontario with the Ontario GenWeb and 1st host for the counties of Soulanges & Vaudreuil Quebec with the Quebec GenWeb. He is also a member of the Comox Valley Celtic Club for these past 10 years.

In 1992 he received the Canada 125th Anniversary medal.

In 1998 Alex joined NATO/Bitron and started using this excellent product to reduce his fuel and maintenance costs. In 2006 under Bitron with Dick Simmonds Bitron President reached the Director, Founder and Presidential level in Bitron. He is averaging with his 1997 GMC 1/2 truck over these 12+ years basically every 3rd tank of gas Free. His truck fuel consumption when from an average of 17 mpg to an average of 24mpg over these 12 years.

Alex, now lives in Courtenay, BC with his wife, helper, companion and adviser, Rhoda
Ross as they continue their efforts in preserving local Glengarry area history. This present work being the latest of that endeavour.

RHODA P WESTLAKE ROSS, born 1932 in Montreal, Quebec whose ancestors came from
England in 1875 and Stornoway, Scotland about 1928. Educated in local Montreal schools, she
married John Ross of Curry Hill, Ontario in 1951 and had 5 children, 3 boys and 2 girls. She
presently has 12 grandchildren. After her husband John died in the summer of 1976 she
became involved in helping Alex with his research, collecting information and publishing. They
have been working as a team ever since. Rhoda also enjoys oil painting, baking and gardening.

Rhoda has now finished her major work on the McNaughton’s of Glengarry 4 volume family history, about 1600 pages which has just been published.

In 2003 or 4 she joined the area Originals Only painting group and has displayed her numerous paintings in at least 4 of the Original Only shows since.