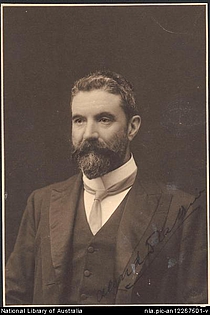 Om migI was born in Australia in 1856 and died in 1919. I practised law and worked as a journalist before entering Victorian (state) politics in 1879. I became interested in the Australian federation movement and became a member of the new Australian national government in 1901. In 1903-4 I became Australia's second Prime Minister and served again in this office in 1905-8 and 1909-10. I had a life long interest in reading and literature and was the author of four books and numerous parliamentary reports.

Om mitt bibliotekMy library consists of the 1360 books located in my home at the time of my death in 1919. A 32pp listing was made of my library by my family before my books were dispersed. This list is typed, heavily annotated, contains many misspellings and lists authors and titles only. The Alfred Deakin Prime Ministerial Library at Deakin University, Australia, houses some of the books from my library.
The list of my books is located within my papers (MS 1540/4/692) which are held by the National Library of Australia, collection number MS 1540.
The list is arranged in rough subject order. These subject headings were assigned by my family and are: Agriculture, Biography, Education, Essays, Essays & Literary Works, French Books, Health, History, Miscellaneous, Novels, Poetry & Drama, Politics, Religion, Travel & Exploration.
More interesting is the fact that the list provides the location of my books within my house, thus making it possible to assess which were of most importance to me. These locations are: Study, Landing, Breakfast Room, Drawing Room Bookcase, Wilfred's (my grandson) Room. It can be assumed that the 954 books located in my study were the ones I most frequently used and consulted and perhaps that those in the drawing room represent my public face.
Unfortunately, exact edition details of my books are rarely available. In almost all cases the most logical or seemingly appropriate bibliographic records have been used. Where a book has been identified as being one which I actually owned, this will be indicated in the Comments field.
My tags will include the original subject headings and locations used in the 1919 list of my library.