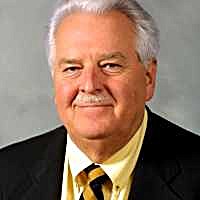 Om migI served Wake Forest University Police Department for 25 years, serving as Director of Public Safety and Chief of Police for 12 of these years. Then I assumed an administrative position with Wake Forest University for an additional 10 1/2 years, and I will be retiring June 30, 2008, after a Total of 35 1/2 Years with Wake Forest. Before Wake Forest, I was in local law enforcement for 10 years, thus having a total of 35 Years, just in law enforcement. I have been married to my lovely wife, Cathy Ann Poindexter Hill, for 40 Years, and we have two (2) children, Allison Michelle Hill Duncan, who has two (2) children (our grandchildren) Cara and Corbin, and Alton M. "Mickey" Hill, wife Sebrina Meldau Hill, and they have two (2) children (our grandchildren) daughter, Taylor and son, Alex.

This is a photo, family history book about the first immigrant of the Poindexter (Poingdestre) family, George Poindexter (Poingdestre), and his plantation home, Criss Cross, earlier known as Christ Cross, by the cross design. George Poindexter came to America from the Isle of Jersey, one of the British Channel Islands, off the coast of Normandy, France, and first settled in Middle Plantation, Virginia, now known as Williamsburg, in the 1650's. In 1680, he moved to New Kent, County, Virginia; in 1685, he and his wife, Susannah, began to build their plantation, Criss Cross, which was completed in 1690. Following George’s death in 1691, Susannah continued to live there until her death two years later. Then, their son, George II, continued to reside there. Criss Cross, left the Poindexter family in 1830, and has been out of the family since. By the 1950’s, it was almost completely deteriorated, when, in 1953, Ed and Gayla Harrison, saw the home, fell in love with it, realized its potential, and made a financial/time commitment to restore this home. In 1972, the Harrison’s made application to the U.S. Department of Interior to have Criss Cross placed on the Register of Historic Homes in America, and in 1973, the home was placed on the Register, and has been since that time. This book features old and new photos, as well as copies of original documents associated with this home, history, restoration and status today.

This book may be purchased and personally autographed by me, by contacting me by e-mail at: hillam@wfu.edu, or by telephone at (336)377-2954. The price is $40.00 (US Dollars), PLUS $8.00 shipping and handling. Payment may be made by personal check made payable to "Alton M. Hill".

Additionally, SAVE shipping and handling, by visiting the Wake Forest University Campus College Bookstore, on the Wake Forest campus (for additional information, and for directions and hours, you may visit their web site at http://www.wfu.edu/stores/bookstore-main.html. My book may be purchased there for $40.00 (US Dollars), PLUS NC sales tax.