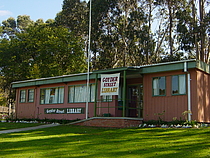 Om migThe Goyder Street Library is a not-for-profit community lending library staffed entirely by volunteers and supported by donations. On 24 May 2010 we celebrated our third successful year of community service. From small beginnings we have grown to a substantial library with a collection of nearly 15000 items for loan.

On December 1st, 2006, the ACT ALP Government closed the Griffith Library, located in the ACT suburb of Griffith in what was once the Griffith Primary School. Since self government in 1989 there had been other attempts to close first the Kingston Library (which was relocated to Griffith) and later the Griffith Library by various ACT Government groupings, including a close run attempt in 2000 by the then ACT Liberal Government. This time there was no consultation, just a decision to close. Residents were outraged and there were many letters to the editor, calls to talk back radio and interviews with affected borrowers on TV, and public rallies. People continued to feel aggrieved, especially when it became apparent that the social impact of the closure had not been measured.

A small group of people continued to meet together and explore the possibility of maintaining a library presence in the inner south. Finally they committed to opening a modest library/drop-in-centre with the clear aim of proving the community need for a library in the inner south.

After much searching, the Aboriginal Sports and Recreational Centre, at Boomanulla Oval on Goyder Street in Narrabundah offered a building within the oval which had formerly been a boxing ring. The Southside Community Library Taskforce accepted the offer and went public with the news on Thursday 19th April 2007 that we would open in 5 weeks. Canberrans heard our call and books, fittings and offers of help flooded in. Local residents volunteered their help with repairs and maintenance.The Goyder Street Library was officially opened by Jack Waterford AM, who is now our patron, on Thursday 24th May 2007.

Everything in the Library is donated: the books, the fittings (over 35 bays of stand-alone shelving and various book cases), furniture and all our equipment.