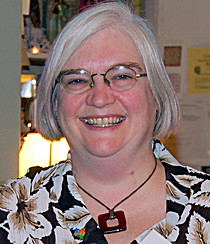 Om migThere were hints - not only was I dedicated bookworm from elemetary school on (the first to be allowed to take books off the shelf, and not the table, in the elementary library; known for reading as I walked the halls, sidewalks, and stairs, but not, traumatically, voted Class Reader in sixth grade - my friend Kimala Ann Bell got that honor), almost all of my jobs, save at McDonald's, at a local battered women's shelter, and selling newspaper ads - have been in books. I worked at the Perry Public Library, the Rochester Public Library main branch(page in the children's room), Yankee Peddler Books (used and antiquarian), Rochester Public Library, Highland Branch (clerk), Borders (bookseller) Sears Library at Case Western Reserve University (reserves clerk), the Village Bookshop in Columbus (bookseller), The Little Professor Book Company in Worthington (bookseller, supervisor, assistant manager, manager), but when I moved back to my hometown of Perry, New York, I wasn't thinking of opening a bookstore, exactly. Although everyone seemed to think I was. And I did, taking time in the couple of years before a storefront became vacant to get married, sell coffee from a coffee cart at the Farmers' Market, and have a baby. Now the baby's a 4-year-old, living with his darling daddy in California, and I have this amazing job. I have finally stopped walking around the store with a big grinning, thinking or saying "Holy crap, I own a bookstore!"

Om mitt bibliotekBookstore, that is. Burlingham Books, in the heart of downtown Perry, New York, the boyhood home of Chester A. Arthur, home of the Silver Lake Sea Serpent, and so much more. We opened January 31, 2006, and are going strong - over 10,000 books, about 80% new, live music every Saturday night, and the only espresso bar in town. We've won two awards in the last year - the county chamber of commerce's "most promising new business" award, and an award for promoting tourism (yes! come visit! see Letchworth State Park, the Grand Canyon of the East, look at our beautiful farm country, avoid hitting the deer, and mount a lakeside watch for the sea serpent) from the Wyoming County Tourism Promotion Agency. And we're 2/10ths of a mile from the lovely and talented Perry Public Library, home of the Stowell-Wiles Art Gallery (and home of one of my first volunteer and then paid jobs). Oh, and have I mentioned that my town smells of cookies? Sure, sometimes it smells of manure, but when the wind's from the right direction, the cookie factory gives us glorious sugary scents.