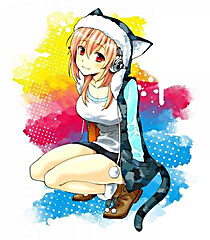 Om migI play the flute and piano. I love to read my friends sometimes take my books and run. To them, I read too much. My favorite books are Harry Potter, Twilight, ShadowHunters, Warriors, Percy Jackson, Fablehaven, Maximum Ride, Divergent, and Wings of Fire. I have a twin sister and younger sister. My favorite class at school is math. I want to be a veterinarian.I love to roleplay especially if it's a fantasy one. I'm also a fan of anime especially Fairy Tail. The best anime ship is NaLu. If I was a child of a Fairy Tail character then I would probably be Levy and Gajeel's daughter. I adore Superwholock and Merlin.

Help spread awareness of bullying and you know maybe if you are being bullied try be friends with the bully because you never know what caused them to go down this road. Help them start over and be nicer.