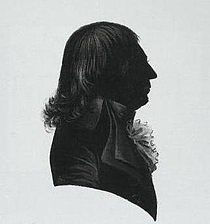 Om migI am Jean Népomucène Auguste Pichauld, Comte de Fortsas. I was born on 24 October 1770 at the ancestral home of the Fortsas family, Waudrez-sur-Bruille, near Binche, in the Belgian province of Hainault. I died at that place on 1 September 1839, at the mercy of my books.

Om mitt bibliotekIntroduction: When I was nine and twenty years of age, I began a collection of books, in accordance with the simple principle that those specific editions residing on my shelves must be unique copies, found in the holdings of no other collection. Any volume known to exist elsewhere is instantly removed from my shelves to be sold, given away, or, in certain cases (regrettable but necessary), utterly destroyed.

This inexorable law has caused me no little heartbreak; I have seen my collection shrink rather than grow over the course of my own life. With the publication of that cursed Brunet's Nouvelle recherches bibliographique alone (1834), I lost a full third of my great library! I could bring myself to make no new acquisitions after that date.

Those fifty-two titles you see included here comprise that small but noble portion of my library which remained intact and unmatched at the time of my demise, as they were published in the Catalogue d'une très-riche mais eu nombreuse collection de livres provenant de la bibliothèque de feu M'r le Comte de J.-N.-A. de Fortsas, printed at Mons by Emmanuel Hoyois. Let Hoyois' introductory note serve the same purpose here: "N.B. It has been thought necessary to follow, in the impression of this catalogue, the manuscript inventory left by the proprietor of the collection, and to reproduce a part of the notes with which each article is accompanied. The Comte entered his books an in irregular fashion (pèle-mèle), without following any system of bibliography whatsoever: for a library so small, a classification would have been, in fact, useless. The discontinuity in the numerical sequence proceeds from the successive evictions that the Comte made from among the works on his shelves."

The balance of the events with which I am associated occur after my passage from the scene, but I believe the bibliophile of any day will find an account of them worthy of perusal.

The Catalogue Received: Publication of the Catalogue in the spring of 1840 put the name of Fortsas suddenly on the lips of bibliophiles across Europe and Britain. Up for grabs would be not one, but two(!) unknown Elzevir imprints (the Corpus juris civilis, 1663; and Il pentamerone in Italian, 1675). For the collectors of early Dutch printing there were incunbular works from the Audenarde press of Arend de Keyser (Boethius' De consolatione philosophie, 1477; and a Dutch edition - the first - of d'Arras' Mélusine, 1481). For the acquirer of association copies, volumes once owned by Hotman and Leibniz could be had. Among the scandalous or subversive works were a vicious pamphlet containing salacious details of Louis XIV's fistula, a catalogue of the romantic conquests of a Prince de Ligne, and a 1794 essay comparing the execution of Louis XVI by the French to that of Jesus Christ (which earned its author a premature end before the barrels of a Revolutionary firing-squad). The Catalogue offered something to whet the appetite of every major collector, and, as Walter Klinefelter has written, "never before in all the annals of bibliophily did the emission of a book catalogue give rise to so much emotional perturbation in the most select and the most sedate libraries of Europe or of any other geographical division of the globe."

The auction of the Fortsas library was advertised in the Catalogue for 10 August 1840, at 11 in the morning. It was to be held at the offices of notary Maître Mourlon, located at 9, rue d'Église in the town of Binche. Potential purchasers were advised that the books would be available for viewing from 3 until 6 in the afternoon on 9 August, and that those unable to attend the sale in person could send commission bids to M. Hoyois. Those began arriving by 18 July, originating from the likes of Elzevir collector Jean Baptiste Leclerqz, Paris bibliophile Baron Techener, and Belgian ambassador Jean Sylvain Van de Weyer (this latter so sure of his success that he set no limits on his bids and asked Hoyois to send the books to his wife in Brussels and the bill to him in London). Liége archivist M. L. Polain, who possessed the incomplete copy of Mémoires de l'abbé D. M. R. D. F. A. L. as described in Fortsas' catalogue note, wrote to Hoyois asking him to procure the complete copy on his behalf "at the best price possible." In fact, Hoyois received at least one bid for every single item listed in the Catalogue.

But commission bids would not suffice for the greatest luminaries of European book collecting. The great, voracious English collector Sir Thomas Phillipps apparently intended to be there in Binche personally, as did Auguste Voisin (the librarian of the University of Ghent), historian Polydore Van der Meersch, Baron Reiffenberg (Keeper of the Royal Library at Brussels), famed bibliographer Pierre Duplessis, and the booksellers Jean Baptiste Castiaux, Louis François Lemaître, and Romain Merlin (for information on these fellows, see Klinefelter, pp. 38-42). Representatives of the major book-collecting clubs (including the Roxburghe Club, the Bibliophiles Français, and the Camden Society) also planned to be on hand. Voisin had received a personal entreaty from the Princess de Ligne to "buy at any price the follies of our rascally grandfather" (Mes campagnes aux Pays-Bas). After much lobbying, Reiffenberg had secured the approval of a grant of 1800 francs from the Belgian government for the purchase of select items for the state library.

The Comte and his Catalogue had their skeptics. Collector R. Brisart claimed to have seen listings of some titles in other catalogues, as did the Baron de Gerlache. Jean Baptiste Castiaux, bookseller of Lille, believed strongly that he had "several copies" of the Causes qui doivent infalliblement amener la dissolution du royaume des Pays-Bas in his shop, but was unable to locate any at all. He went so far as to visit the Tournai print shop where the original printer's brother still did business: Joshua Casterman and his warehouse-keeper both remembered the pamphlet and were sure that a bundle remained, but an eight-day search of their stock failed to turn up a second copy to the Fortsas exemplar.

L'Affaire Fortsas: At long last, the morning of 10 August dawned in Binche. Each inbound coach disgorged at least one bibliophile: Reiffenberg, Ketele, Brunet, Nodier, Techner; all set off for the offices of Monsieur Mourlon, but none had any success in finding the rue d'Église, let alone Number 9. The people of the town grew alarmed at the crowd of increasingly-confused and cranky bookmen taking over their streets, asking after men and streets of which the residents of Binche had no knowledge whatsoever.

Before long, a broadsheet notice (the text from which had also appeared in the previous days' local papers) was discovered. The notice's words struck the waiting would-be-bidders dumb: "The public is informed that the choice library of the Comte de Fortsas will not be sold at auction. Amateurs doubtless will hear of this with regret. But his precious collection will not be lost to our land: it has been acquired by the town of Binche for its public library." Well then, said the tremendously disappointed group, let us visit the library so that we may at least see the treasures since we've come so far. The townspeople remained confused: their village had no public library.

With that revelation, the gig was up, and the dejected bibliophiles realized they'd been had, and how. There was no public library, there was no Maître Mourlon or a rue d'Église. There was no Comte de Fortsas. There were no books!

Dénouement: The great hoax, which made bibliofous ("a bibliobooby," Klinefelter translates) out of the greatest bibliophiles of the day, was known to only a few. Its main perpetrator was Renier Hubert Ghislain Chalon, a retired army major, bibliophile, and numismatist well known for being a prankster. The printer Hoyois knew, of course, and he maintained that Henri Delmotte and Etienne Hénaux were in on the plan as well. Constant Philippe Serrure, a historian and philologist who came to Binche for the sale, also seems to have known of the scheme; he had suggested the notice announcing the library's purchase of the collection to Hoyois in late July.

Charles Nodier had been suspicious from the first, and his views led Baron Techener to ask Hoyois "Are you not up to something?" (He submitted bids and travelled to Binche anyway, just in case). Voisin had requested assurances from Hoyois that the Catalogue was not "as I have some reason to suspect, a bibliographical hoax of very witty and very learned traces." By 8 August, Polain had even fingered the hoax's author, writing in his own letter to Hoyois "If anyone has been able to make this excellent pleasantry, it is none other than ... M. Chalon." Joining the fun, Polain published an article in the Liége newspaper La Politique on the evening of 10 August, recounting the sale as if it had gone off as expected (going so far as to provide names of the buyers and the prices paid for the great rarities).

Fortsas Documents Transcribed: transcriptions and accompanying translations of the Catalogue and other documents.