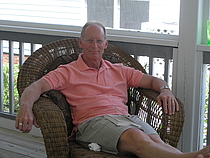 Om migNow that I've surpassed my original goal of 3,000 books, I'm diligently working on the next 3,000. I once read a story about a man whose 45 tons of books caused the collapse of his house. What a way to go! How many books would that be??? (My wife watches me like a hawk, when I bring my books home.) My pecularity has caught onto my youngest daughter who at 24 years has over 1,000 books now. Working at a bookstore helps increase her collection! And my eldest daughter has quite an extensive collection of cookbooks. And my son's library consists mostly of baseball books. I would guess our house has about 6,000 books. Whew!

Om mitt bibliotekI've been collecting (and reading) since I was 9. The first book I recall, was Twenty One Balloons. This enchanting book led me down the path of reading. My collection consists of a cross-section of 18th-19th century literature, U.S. and European history, heavily laden with English and Russian Royalty biographies, architecture, philosophy, religion, and substantial contemporary literature.

A favorite passage from Georges Bernanos: "Of course, there have already been many deaths in my life. But the most irretrievable death is that of the little boy I once was. And yet, when the time comes, he is the one who will return to his place at the head of my life, marshaling my poor years, down to the very last, and like a young leader rallying veteran troops in disarray, he'll be the first to enter my Father's house."