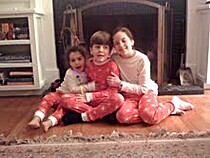 Om mig"When we give children books, we become part of their future, part of their most cherished memories and part of their entire life. Children's books change lives." Anita Silvey, EVERYTHING I NEED to KNOW I LEARNED from CHILDREN'S BOOKS, 2009

When my first grandchild, Eleanor, was about 18 months old I decided to start a library and by more books than toys. A local children’s librarian mentioned the Eric Carle Museum which is not far from our home. Mr. Carle was scheduled to be there the following month. We went, met Mr. Carle, purchased several books, had them signed and thus the genesis of this library and the first, signed first edition, PANDA BEAR, PANDA BEAR, WHAT DO YOU SEE

About a year after I began collecting Caldecott's and illustrated books I discovered Advance Reading Copies which led me into acquiring Young Adult titles and Newbery titles. Along the way I have added adult titles I thought should be in their collection. Some are my personal choices and some I have chosen with them in mind as they grow up. It is my decision to collect Pop-ups for their library. I couldn't stop. I thought it was only going to be illustrated books.

I now (2014) have four grandchildren ages 1,5,9 and 12. I continue to collect every day. It has been a very rewarding experience and I feel very fortunate to have been able to meet some wonderful collectors, authors and booksellers who have guided me, even when I had my doubts and stubborn ideas in my head, in the right direction in making the right selections. One of those collectors and author was the late Peter Sieruta. We talked, we traded and he tutored & I learned. His knowledge was invaluable and I miss his charm and knowledge about children's book and most of all our conversations. Thank you Peter. RIP

I have developed a preference for some authors and illustrators but have tried to keep a balance not knowing what genre they will embrace later in life.

This collection is a work in progress and lots of fun not to mention addictive.

Om mitt bibliotekBooks tagged "personally signed" were either signed for me in person or were mailed to the author/illustrator with their consent for their signature.

"Personally inscribed" is inscribed to Eleanor, Henry, Deanna or Amelia by author/illustrator. "Inscribed by author" is to a third party.

"Signed", the book was purchased signed by the author.

Later printing is any printing other than a First Printing, which are tagged First Edition.

GrupperARC Junkies, Bookcases: If You Build/Buy Them, They Will Fill