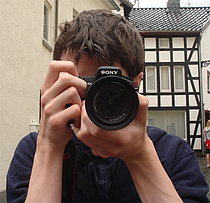 Om migLive and study in Uppsala Sweden. My as main is computer science. I have always loved books, since I was a little kid and I have always been reading at least one book, on paper or as an adio book, despite I have dyslexia (hence i read a lot of adio books).
My other interests beside reading is video games, board games and role playing games. I also love math and computers (or other electronic stuff). I also love comic books, both classic American comic books (by such as Marvel or DC comics) and also manga books like “Beck” or “Nauscaä”.

Om mitt bibliotekI love children's books and hence I have big collection of them scince I was a kid. You have to love the beautiful and wonderfull stories by Roal Dhal! I also love fantasy books like Lord of the Rings (thou I do not have those books, a problem I will sometime solve) and I have a lot of those.
If you check under “comic” in my collection you will pretty son notice that Spider-Man is my choice for best super hero. (Hes Awsome!) but i realy love Niel Gaimans books about the Sandman.
For my role playing books I do not own so many, however I have a little role playing association (about 16 people) that get money from a organisation calld Sverok (the Swedish society for role play- and conflict games) and that association have bought a lot of Role Playing books. It is I who have those in my home, do I have included them here on libarything.