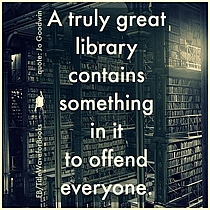 Om migAm a recovering librarian, adjusting to a rather early retirement, after being made redundant toward the end of 2011. May look for a new career later but am enjoying the liberating experience of tidying house and throwing out lots of accumulated paperwork from my 37 years work in libraries. Also I can catch up with some reading.

Om mitt bibliotekStill a work in progress as there seems to be quite a few things I'm having to catalogue from scratch. The collection mostly contains the books I've read/used and still own. Have disposed of many over the years so am not going to attempt to list those or ones I've borrowed. There's also a garage full of rejects (not listed) that I won't get round to reading again and that I'm flogging on various websites.
Have had many subject interests over the years so some collections have expanded during periods of intense interest whilst others have contracted. I tend to buy books faster than I read them but I regard that as saving for my old age. The next job might be to catalogue my collection of DVDs and videos which should keep me busy for quite some time.