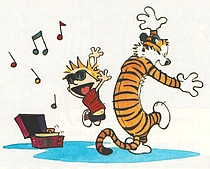 Om migAlthough I spent almost 11 years working in a research library, I'm also an editor (freelance at the mo), and have spent more than 20 years working on art criticism, essays, catalogs, reference, and publicity materials--and, mortifyingly enough, a couple-few years working on financial research. As a consequence, I'm afflicted by The Never-Closing Gimlet Eye; I can't even glance at a menu without finding a typo, which amuses my friends to no end. I'm also a compulsive archivist and a congenital book glutton--I don't want to borrow it from a library, I Want to Have It. The collection that's made my poor apartment impossible to navigate, though, is rendered microscopic by others documented on this site. (I'd've had several hundred more, mostly gems gleaned from second-hand places, were it not for the hideous perfidy of parental units who threw away all the books I had at home without even a word of warning. And don't even get me STARTED about the Star Wars cards.)

Om mitt bibliotekWhoof! I'm working on all my satellite shelves, obstructive stacks, and shifting piles first; it'll be a while before I get to the books that have homes on a proper shelf. (Those are most of my reference books, art books, and gallery catalogs.) Looking down this smoking barrel of documentation, I find it hard to believe that I only occasionally buy books these days. They must be breeding or something.

(UPDATE: I've made my way through about half the shelves so far, and most of the piles. I still think they're breeding.)

(UPDATE II, THE WRATH OF KHAN: I finally knuckled under and created a wishlist account--CakeOrDeath--since it seems quite unfair to me to have sheer, slobbering yearning alone bumping up my numbers. This account here is about what I already have in my greedy little hands; that one is all about the Oo and the Gimme.)

I have a downright embarrassing fetish for reference books; The Strand and Librarie de France (RIP) have both been perilous meccas. I also lean pretty heavily toward humor (especially compilations of favorite comic strips), sci-fi/fantasy, comics, manga, and the generally dark and twisted. As a PK* and a religious-studies major, I have some of that material too; my interests in subjects like social justice, politics, feminist theory, the martial arts, animation, and Native-American and Asian cultures also rear their nappy heads.