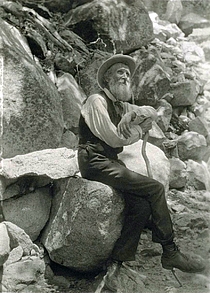 Om mig"Every excursion I have made in all my rambling life has been fruitful and delightful from the smallest indefinite saunter an hour or two in length to the noblest summer's flight with steady-aim like a crusader bound for the Holy Land or a bird to its northern home following the flight of the seasons."

John Muir (1838-1914) was a Scottish-born journalist and naturalist best known for his explorations of the Yosemite area (1868-1873) and for his efforts to create Yosemite, Sequoia and General Grant National Parks (1890). He was also a founder of the Sierra Club (1892).

Om mitt bibliotek"I have a low opinion of books: they are piles of stones set up to show coming travelers where other minds have been, or at best signal smokes to call attention....One day's exposure to mountains is better than cartloads of books."

John Muir's Personal Library, housed at the Holt-Atherton Special Collections at the University of the Pacific. This collection comprises approximately half of the books known to have been in Muir's personal library. Any information on additional Muir titles would be welcomed.