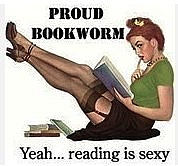 Om migReading is one of my major passions although I have a number of things I like to do when I'm not doing that pesky work thing (I'm a college humanities professor, btw). In addition to spending time with my husband of almost 22-years, my two teenage children & my two lovable mutts (both rescue dogs :)), I also enjoy Geocaching, working out at the gym, hiking and knitting. I even own a store on Etsy.com where I sell all sorts of eclectic knitted items. My shop is Mooshie's Knit Palace

Om mitt bibliotekI've been a bibliophile since...since...well, since before I can even remember! It's hard for me to pinpoint my favorite reading genre...as a matter of fact, you could call my interests downright eclectic.

When it comes to fiction, I enjoy everything from historical fiction, to fantasy, sci fi and bizarro fiction. Romance as a genre tends not to hold my interest, although romantic adventures are fun! (I guess by romance as a genre I'm referring to the harlequin-Danielle Steele-boy meets girl-formula)

I also enjoy non-fiction - biography, history, science, culture. My one criteria for pleasure reading of non-fiction is that it doesn't feel like I'm reading a textbook. I do enough of that at work. I like non-fiction that peaks the readers' curiosity without that classroom feeling.

Describe how you feel: Go the F^%k to Sleep

Describe where you currently live: Swamplandia!

If you could go anywhere, where would you go: Island of the Sequined Love Nun

Your favorite form of transportation: A Dance with Dragons

Your best friend is: Packing for Mars
You and your friends are: A Visit from the Goon Squad

What's the weather like: The Scent of Rain and Lightning

What is the best advice you have to give: Rules for Virgins

Thought for the day: Bonk

How I would like to die: A Storm of Swords

"A mind needs books as a sword needs a whetstone, if it is to keep its edge." George R.R. Martin

"The best fantasy is written in the language of dreams. It is alive as dreams are alive, more real than real ... for a moment at least ... that long magic moment before we wake.

Fantasy is silver and scarlet, indigo and azure, obsidian veined with gold and lapis lazuli. Reality is plywood and plastic, done up in mud brown and olive drab. Fantasy tastes of habaneros and honey, cinnamon and cloves, rare red meat and wines as sweet as summer. Reality is beans and tofu, and ashes at the end. Reality is the strip malls of Burbank, the smokestacks of Cleveland, a parking garage in Newark. Fantasy is the towers of Minas Tirith, the ancient stones of Gormenghast, the halls of Camelot. Fantasy flies on the wings of Icarus, reality on Southwest Airlines. Why do our dreams become so much smaller when they finally come true?

We read fantasy to find the colors again, I think. To taste strong spices and hear the songs the sirens sang. There is something old and true in fantasy that speaks to something deep within us, to the child who dreamt that one day he would hunt the forests of the night, and feast beneath the hollow hills, and find a love to last forever somewhere south of Oz and north of Shangri-La.

They can keep their heaven. When I die, I'd sooner go to middle Earth." ~George R.R. Martin


"I am not going to get into it myself, except to say
(1) if I am writing "boy fiction," who are all those boys with breasts who keep turning up by the hundreds at my signings and readings?
and
(2) thank you, geek girls! I love you all.Ã¢ï¿½ï¿½ ~ George R.R. Martin

Ã¢ï¿½ï¿½Books help to form us. If you cut me open, you will find volume after volume, page after page, the contents of every one I have ever read, somehow transmuted and transformed into me. Alice in Wonderland. the Magic Faraway Tree. The Hound of the Baskervilles. The Book of Job. Bleak House. Wuthering Heights. The Complete Poems of W H Auden. The Tale of Mr Tod. Howard''s End. What a strange person I must be. But if the books I have read have helped to form me, then probably nobody else who ever lived has read exactly the same books, all the same books and only the same books as me. So just as my genes and the soul within me make me uniquely me, so I am the unique sum of the books I have read. I am my literary DNA.Ã¢ï¿½ï¿½
~ Susan Hill, Howards End is on the Landing: A Year of Reading from Home

"Harry Potter is about confronting fears, finding inner strength and doing what is right in the face of adversity. Twilight is about how important it is to have a boyfriend." - Stephen King

"Finally, from so little sleeping and so much reading, his brain dried up and he went completely out of his mind." -Miguel de Cervantes Saavedra

"Literature is my Utopia. Here I am not disenfranchised. No barrier of the senses shuts me out from the sweet, gracious discourses of my book friends. They talk to me without embarrassment or awkwardness." ~Helen Keller

"When we read a story, we inhabit it. The covers of the book are like a roof and four walls. What is to happen next will take place within the four walls of the story. And this is possible because the story's voice makes everything its own." ~ John Berger

Ã¢ï¿½ï¿½"The current research suggests that books give readers more than an oppty to submerged themselves in fantasy worlds. Books provide the oppty for social connection & the blissful calm that comes from being a part of something larger than oneself for a precious fleeting moment." -Gabriel & Young, University at Buffalo

Ã¢ï¿½ï¿½To learn to read is to light a fire; every syllable that is spelled out is a spark.Ã¢ï¿½ï¿½ - Victor Hugo

"Reading is to the mind what exercise is to the body."
~Joseph Addison

"Books fall open, you fall in. When you climb out again, you're a bit larger than you used to be" ~ Gregory Maguire

"Books are the plane, and the train, and the road. They are the destination, and the journey. They are home."
~ Anna Quindlen (How Reading Changed My Life)

"The only valid censorship of ideas is the right of people not to listen." ~Tommy Smothers

We have a natural right to make use of our pens as of our tongue, at our peril, risk and hazard. ~Voltaire, Dictionnaire Philosophique, 1764

The dirtiest book of all is the expurgated book. ~Walt Whitman

Books won't stay banned. They won't burn. Ideas won't go to jail. In the long run of history, the censor and the inquisitor have always lost. The only weapon against bad ideas is better ideas. ~Alfred Whitney Griswold, New York Times, 24 February 1959

Censorship feeds the dirty mind more than the four-letter word itself. ~Dick Cavett

To choose a good book, look in an inquisitorÃ¢ï¿½ï¿½s prohibited list. ~John Aikin

To limit the press is to insult a nation; to prohibit reading of certain books is to declare the inhabitants to be either fools or slaves. ~Claude-Adrien HelvÃ�Â©tius

BookBrowse: Your Guide to Exceptional Books

Challenged and Banned Books - Reasons Why These Famous Novels Were Removed

NOT the New York Timess Book Review on Facebook

The mutilation and rebirth of a classic: Fahrenheit 451

10 Best-Selling Books That Were Originally Rejected

George R.R. Martin on His Favorite Game of Thrones Actors, and the Butterfly Effect of TV Adaptations

Tower of the Hand

Inn at the Crossroads: In the Game of Food, you win or you wash the dishes...

Westeros: The Song of Ice and Fire Domain

George R.R. Martin is the Newest Author to Join the Kindle Million Club

My Accidental Masterpiece: The Phantom Tollbooth

What exactly is 'Hunger Games?'