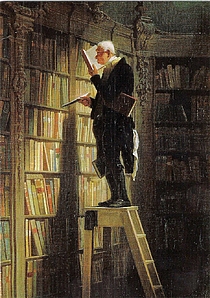 Om migActual retirement now. I was a costumer, i.e., a purveyor of period costumes for operatic and theatrical productions. I had been working at this for over 30 years. Before that I was in academia, and had serious thoughts of one day becoming a "don". Various things conspired to make me change, and I ended up in a field of activity that would have been unimaginable to me as a college student. However, I kept an inexhaustible appetite for reading from my academic days especially in my abandoned vocation of history, Russian or otherwise.

Om mitt bibliotekSometimes I feel my library is like a bonsai. It grows slowly, methodically. Sometimes it grows in spurts, but at all times it is constantly being pruned. As many books as I own, I have probably had nearly as many pass through my possession. In fact going onto this site has awakened memories of many books read and unread, owned and lost, or given away. Many years ago as a graduate student and an aspiring academic, my collection of books had so many devoted to my field in Russian history. By now most of those have been discarded. Perhaps lack of space required those and other books to be deemed less than essential, thus allowing more room in this reader's lifeboat. As one's taste in literature changes other books and authors have been let go. But some books are not there and their absence puzzles me. What happened to my books by Nabokov? John Fowles? John Barth? Kurt Vonnegut? E.M. Forster? William Styron? Gunter Grass? I have some Thomas Mann still, but where did "Felix Krull" go? "Doctor Faustus?" What happened to my copy of Bulgakov's "Master and Margarita?" Andrei Belyi? Roger Martin du Gard? Alberto Moravia? Giovanni Verga? Do I want to possess these again? Probably not. I had already read them. I'm sure that I won't re-read them; so just to own them again would only be for the purpose of training visitors' eyes on my bookshelves to show the breadth of my collection. My shelves are my bonsai. Once clipped, for whatever reason, the old branches are gone, and the existing ones are the shape that I'm growing.