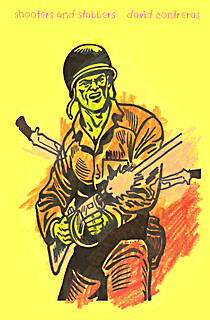 Om migDavid Contreras was born in Texas in 1984, and grew up in Madison, Wisconsin. He's the author of the short story/novella collections, In Great Distance and Probabilities.

On his first novel, Shooters and Stabbers: Time is speeding up. Jacob Molina is the youngest of three children, a 13-year-old trying to find his voice in the entity known as his family. Suffering from reoccurring bouts of introversion, he’s finally on his way to completing the eighth grade. But what awaits him is the quandary of high school, revelations hidden deep within his brother’s afflicted past, and maybe (if one is brave enough) the ability to reverse time itself

Set in and around Madison, Wisconsin, from New Year’s Day, 2011, to New Year’s Eve, Shooters and Stabbers is a delirious mixture of the absurd, the breathtaking, and the hideously comical. Within its massive scope, we meet the acquaintances of rabid talk show hosts, the President of the United States, union protestors, the ‘90s counter-culture, and a mysterious presence known as Anomalous that oversees everything.