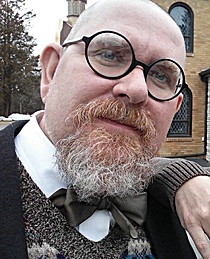 Om migA 13 year resident of Philadelphia, my family is from South Eastern Virginia, although I grew up in Louisville, Ky. I spent most of the '80s in Germany and lived for a few years in Chicago. After many years in the Eastern Orthodox Church, I was received into the Episcopal Church. I am a member of St Clement's Church, Philadelphia a marvelous historic Anglo-Catholic parish, where I served as Sacristan. I am currently a seminarian in my senior year at General Theological Seminary in New York, working towards an M-Div. Here in New York I'm serving an internship at St Edward the Martyr in East Harlem; quite different from St Clement's, an equally historic Anglo-Catholic parish with a marvellous rector and parish community.

Om mitt bibliotekAt one point my library was much larger, I've downsized twice in the past 10 years, selling quite a few books out of necessity. What remains is a hodge-podge collection reflecting my interests, those books that are still special to me and some for which I simply couldn't find a buyer, plus the ever growing pile, now almost an entire bookcase, of new books I've bought, either for or inspired by various classes, since beginning Seminary. I love cookbooks and read them for pleasure. As an Anglo-Catholic, seminarian, and (God willing) future priest many of my books are of Christian interest. My husband is a graphic artist and a huge fan of comic books and the graphic novel art form in general. Although not really my thing, several graphic novels have found their way into my collection via his introduction.