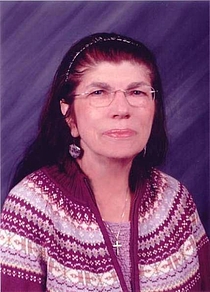 Om migHi! I'm a 68 year old author of YA/adult fantasy books; however, writing is my second career. I worked at an academic library for more than 35 years, occasionally writing draft fragments of novels in my spare time. I was born in Maryland but live in Delaware.

I love the Inklings: C.S.Lewis, Tolkien, and Charles Williams (with special emphasis on Lewis and Williams), plus the "proto-Inkling", George MacDonald. For a/l/l most of my favorite authors, see the official list above.

As an author, I belong to the Written Remains Writers Guild, the Lost Genre Guild (for Christian authors of speculative fiction) & Broad Universe (female authors of speculative fiction. I'm also a member of YAAYNHO (or Young Adult Authors You've Never Heard Of) & I contribute to our blog on a regular basis. I occasionally hang out at FaceBook--but not often. When there, I can usually be found commenting at the "Written Remains" page or at "How Many Pages Did You write Today?".

I love cats, currently having two of them: Khiva who is a seal-point Siamese, and Vartha who is a very fluffy black part-Maine Coon. I enjoy the international music produced by Putumayo, and also like the Canadian Stan Rogers, Gordon Bok, Joan Baez, Steeleye Span (not the same as Steely Dan!), etc.

I enjoy looking at trees and sometimes use the moniker of "TreeLady" on the web. I love the ocean but, alas, can not visit it as often as I would like.

I am a Christian and belong to St Philips Lutheran Church. My books subtly reflect a Christian worldview. Speaking of my books: Currently in publication are "Seabird" and "Earthbow" vols. 1&2, all set on the same fantasy world of Narenta. I've contributed stories to "Stories from the Inkslingers", "UnCONventional" (forthcoming in Jan 2012), and "Dark Places".

Om mitt bibliotekMy library largely reflects my tastes given above. I have about ten floor-to-ceiling bookcases squeezed into my apartment. My collection is strongest in fantasy and books by the Inklings. Other categories are represented--like folk & fairy tales, Bibles & religious works, SF, YA books, some humor & anthologies. It will take quite a while to load all these into this site. I have a Kindle, loaded with just 35 books.
It's probably just as well that all my old audio tapes, CDs and DVDs aren't part of the project. Cataloging them would take years.
Speaking of "years", I became an LT member approximately two years ago but I have added nothing to my LT catalog in well over a year. (A pesky move, one knotty issue afteranother, and a recalcitrant manuscript were at fault.
I long to return to this project! Working on my collection at Library Thing felt like more fun than was legal!