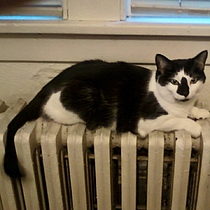 Om migFortysomething male Virgo; employed as a service provider at a residential group home for disabled adults; proud father of a beautiful little grade-school-aged girl; almost as geeked out on music and film as I am books and comics.

If anyone cares, my five favorite albums are...

Om mitt bibliotek"One seeks, in vain, through the mutable, mercurial universe, for the compleat guide. To everything. And, failing in the search, one makes do the best one can."

- Harlan Ellison, "On the Downhill Side"

"...a novel is to be read with enjoyment. If it doesn't give the reader that, it is, so far as he is concerned, valueless. In this respect every reader is his own best critic, for he alone knows what he enjoys and what he doesn't. I think, however, that the novelist may claim that you do not do him justice unless you admit that he has the right to demand something of his readers. He has the right to demand that they should possess the small amount of application that is needed to read a book of three or four hundred pages. He has the right to demand that they should have sufficient imagination to be able to interest themselves in the lives, joys and sorrows, tribulations, dangers and adventures of the characters of his invention. Unless a reader is able to give something of himself he cannot get from a novel the best it has to give. And if he isn't able to do that, he had better not read it at all. There is no obligation to read a work of fiction."

"I think we ought to read only the kind of books that wound and stab us. If the book we are reading doesn't wake us up with a blow on the head, what are we reading it for? ...we need the books that affect us like a disaster, that grieve us deeply, like the death of someone we loved more than ourselves, like being banished into forests far from everyone, like a suicide. A book must be the axe for the frozen sea inside us."

I've been a fan of comics, pop music, and all kinds of fiction since my teen years (if not longer), and this shows in my collection. I dislike attempting to shoehorn my interests into a concise description, but if I had to articulate my overarching fascination over the last quarter-century or so, it would be exploring art that dwells along the borderlands (to use Michael Chabon's phrase) between so-called "high" and "low" cultures.

I use LT primarily for recommendations (and for chat) - as a result there are some books that I own that I have not catalogued as I don't want them to screw up the recommendations algorithm. I am currently cataloging books as I begin to read them or when I recall that I have read them. Additionally, I am slowly (VERY slowly) adding my music collection to LT.