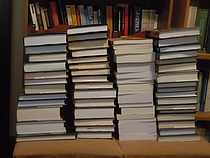 Om mitt bibliotekThis is pretty much a listing of my non-fiction books (and the ones I want!). I have some fiction at home but never read it any more. Seems strange - I didn't start reading history until 1996 and now that's all I ever open.

My background, education and career are in agriculture so I've added my textbooks. I haven't added what's in my office, just what I personally own.

My reviews tend to be a little wordy - hopefully folks will bear with me. Generally I feel like reviewing either a book I'm very impressed with or one that sparks one of my pet peeves so sometimes I do go on. And some of those are fairly academic which takes a bit more anyway. Now that I've started a blog, I'll be posting a link to my reviews on there rather than copying and pasting all the text. If you prefer something shorter I've included brief comments on quite a few of the books in my library which you can see if you choose LT Style "B."

For me, the Medieval period begins with Constantine's official recognition of Christianity (as official as a vision the night before a battle can be anyway) and ends with Luther in 1517 and I've used tags accordingly. You'll also notice that I've been anachronistic with my tags. For example, there is no "Ancient England." I've decided with geographic topics to use the name of what the region is known as today for simplicity.

If you're interested in what I've been reading recently, I've tagged these by year since 2010 as "Read 20XX."