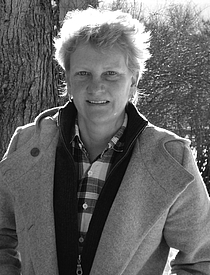 Om migI am not a librarian ... am an editor at Cornell University and an author. I have written two nonfiction books - Women and Guns: Politics and the Culture of Firearms in America (M. E. Sharpe), and From Blood to Verdict: Three Women on Trial (McBooks Press). My new novel, The Rising Shore—Roanoke, tells the story of the Lost Colony through the voices of two women who sail to the New World in 1587. The novel I am currently writing features an imaginative Pennsylvania librarian who is served with a National Security Letter and decides to resist. Have been researching FBI protocol, the statements made by the "Connecticut Four," and interviewing ACLU lawyers and librarians. That work is ongoing. Thanks to everyone at librarything.com who has given me information about the responsibilities (and delights and headaches) of a PA librarian in a relatively small town. I write about American women ... always trying to comprehend the adjective, "American."

EXCERPTS from REVIEWS of The Rising Shore—Roanoke

Full Review from Library Journal:
Owing to perpetual interest in the subject matter, the 2007 release of the English film Roanoke: The Lost Colony, and the 400th anniversary of the founding of Jamestown, this first novel about one of American history's most enduring mysteries may appeal to the literary and book club set. The author's two nonfiction books—Women & Guns and From Blood to Verdict—revealed her interest in feminism and crime. Here, too, she is careful with her facts, using as narrators the famous Eleanor Dare (née White), daughter of Colony leader John White and the mother of the first English child born in the New World, and Margaret, a documented Colony member. The invented portions are believable, including the ending—you can debate the details, but it seems quite logical. The events of 1587 are viewed from the perspective of the women, both of whom are all but powerless as they are carried across the Atlantic and into the New World, one by her longing for recognition from her father and the other by a notion that it had to be better than London, for she'd "never met any beggar girls from Virginia." Lots of violence and tragedy in this version of early American history; most public libraries will want to purchase for readers who enjoyed Jane Smiley's The All-True Travels and Adventures of Lidie Newton. [For more on this title, visit www.risingshoreroanoke.com - Ed.]
— Library Journal


Homsher has succeeded in satisfying the sweet hunger of those enthralled with the [Lost Colony] mystery. She's crafted a solid yet poetic saga that will hold readers captive. ... What truly sings in Homsher's work is her amazing ability to understand life. On every page, she analyzes it with a powerful voice. ... In the end, she crafts a solution to the Lost Colony. It flowered in the mind of a gifted writer.
— The Virginian-Pilot

Homsher paints a harsh yet believable picture of life in Roanoke, and she skillfully intertwines the narratives of the women, revealing the difference in perceptions based on class, situation, and personality, yet painting a clearer and clearer picture of their lives with every stroke. Homsher’s novel gives life to the few scraps of historical documentation of the Roanoke colony and creates strong characters that grab your attention and make you dream of an altered history.
— Historical Novels Review Online [Historical Novel Society]

Some of the best historical fiction takes place in the space between known fact and the novelist's imagination. Deborah Homsher tells a powerful story of the men and, especially, the women who crossed the Atlantic in 1587 to become the settlers of the ill-fated “lost colony.” We can feel the creak of the wooden ships, share the perilous lives of the colonists at sea and on land, and observe the origins of an enduring mystery.
— Bill Jaker, producer and host, “Off the Page,” WSKG Public Radio

This is Homsher's first foray into the world of fiction and make no mistake, The Rising Shore—Roanoke is the work of a powerful talent whose elegant and lyrical words as well as her characters' speech patterns and dialogue give the book much of its considerable strength
— bookpleasures.com