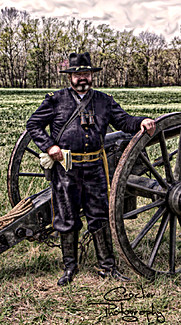 Om migI have always been interested in books of warfare. I studied extensively: Revolutionary War and Civil War and WWII. I moved to Tennessee in 1997 and began to visit the Civil War sites that I had read about. Both my wife and I are actively engage in camping and motorcycle riding. We combine all these in visiting Civil War sites and plan our trips around the different campaigns of the war. I use the books to guide me in preparing for these trips. Since I have retired, the wife and I have taken up Historical Reenacting. We represent Mr.& Mrs. George H. Thomas. The Union General from Virginia that became one of America’s best. Our goal is to enlighten middle and high school students about this distinguished Union general which history has nearly forgotten. I currently am a member of the Nashville Civil War Roundtable and speak in persona as Major General George H. Thomas. I am an active member of the Sons of the Union Veterans, 19th Alabama Civilian Group and support the 9th Kentucky Infantry Regiment at Stones River Battlefield. I volunteer at Fort Negley and Bicentennial Capital Mall State Park. My short term goal is to portray Major General George H. Thomas at each of the battles that he participated in for the 150th commemoration.

Om mitt bibliotekAs I travel I always seek out the local used book stores for books of interest. I soon realized that the internet was the best source for finding books on the specific topic I was interested. Most of my books have been found on the internet.