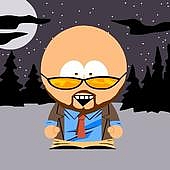 Om migI'm a librarian and writer living in the town of my birth (exCITING Dayton!) My book of stories "Seeking the Link" is available on Amazon et al. and, hey, half of the stories were published elsewhere before being collected. Recently it appeared in Worldcat and I had a little siezure of joy (remember I said I was a librarian). In 2010 I published a story in the collection "Zombiality". I published "Shadowangel" a middle grade novel (a little bit funny a little bit spooky), and a YA novel "Summer Stranger than Fiction" VERY loosely based on a summer I spent at Ohio University during high school.

I review books regularly for Kirkus Reviews. I often guest review for other journals. (I have written sometimes regularly for every journal in Library-land). I was a member of the 2007 Newbery Committee (we picked the controversial "Higher Power of Lucky" -- yeah us!) And then I was on again in 2012 to help pick the fantastic "Deadend in Norvelt" I would love to be on Newbery again.

My hubbie (Trent) and I watch too many movies, go for long walks, and attempt gardening while working to amuse our three furry owners Bubble, Oscar, and Shaggy. We live in a 200 year old farm house that may be haunted (the cats might just be playing tricks on us).

Om mitt bibliotekThese are the books that have survived moves from Ohio to Massachusetts to Ohio to Kentucky to Massachusetts and back to Ohio...to lug em around that much I must love them thus the skew toward the higher numbers of stars.

Many other books have passed through my hands & our house (600 came to me by mail in 2006 alone thanks to Newbery...most of those didn't stay). I sold complete collections of Piers Anthony and Orson Scott Card because one is a misogynist and the other is a homophobe.

I'm working to get all of my books on Librarything. I have an inexplicable love of statistics (for someone who finds math boring) & can't wait to see what books I have in common with other LTers.