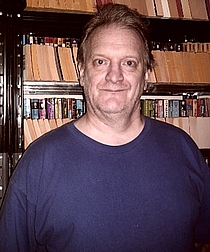 Om migI currently live in the Shenandoah Valley of Virginia. It's beautiful, with many walking, hiking, fishing, hunting, and historic possibilities, which I enjoy as often as possible.

I've been married over 35 years and have one daughter, and one cat.

I'm an Original Trekker, and love almost any & all book, movie, and/or TV Science Fiction and Fantasy, especially 'Star Trek' and 'Babylon 5'. You could say I'm a SF&F fanatic. I have over 50,000 SF&F books in my home. I'll read almost anything once. The things I like, I'll read more than once. I'll review things I really like - or really hate.

I love Disney animation and consider myself a Disneyphile. I own almost every Disney animated movie, and several live-action Disney favorites. I enjoy answering Disney trivia questions. My ultimate dream is to live near Disney World in Orlando, Florida.

I'm the 'original' GURPS GM, and I've been role playing and gaming for more than 30 years. I've played and run almost every role playing game known to man. I also enjoy Collectable and Customizable Card Games such as 'Warlord'. I'm an active Live Action Role Player, and frequently attend area gaming and SF conventions. I also game with miniatures and play board wargames.

I am almost always at least a Worldcon associate member, and enjoy meeting and talking to some of my favorite authors and artists. My favorite part of Worldcon is the Costume Contest. I also enjoy attending local and regional science fiction and fantasy conventions.

My Personal Favorites: My favorite book is Jules Verne's '20,000 Leagues Under the Sea'. My favorite movie is 'The Wizard of Oz'. My favorite music is Progressive Rock - and Rick Wakeman and Keith Emerson rule this genre, although more modern bands like 'Spock's Beard' and 'Glass Hammer' are cool, too.

Many of my friends call me psychic, and I've been known to do Tarot Card readings for myself and friends and a few associates. I've also cast I Ching and explored the Kabbalah. I don't do horoscopes, though.

I'm writing a multi-volume fantasy series, and hope to be a published author someday. Any editors out there?