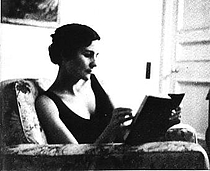 Om migthe right sentence can marry me or make me go blind.

i am a softie and oh-so-sentimental and it's reflected in the lines i hold onto--everything is desperation and mute clinging for me. hence the love for brilliant suicides, slipping crazed lonelies, and those burnt on conviction--mishima, kleist, pound, genet, walser, nerval, benjamin, lorca, smart, proust, nabokov in certain instances--so teenage of me, i know. confusion over what it means to extend yourself and the impossibility of "reaching" anything/anyone outside of yourself coupled with the endless drive to achieve that impossibility upset me and keep me awake in a good way, so i gravitate towards writers who seem troubled by this as well, who seem to wonder how being tied to someone else changes one's identity. (yes, this even includes stuffy/elementary dudes like steinbeck, forster, hugo, london.) for that reason i am a huge sucker for those novel-of-manners tomes, particularly those with an american twist (wharton and james of course). yes, i am One Of Those Dorky Girls who squirms and gets all glassy-eyed over those heart-breakingly awkward, tense scenes where social convention prevents people from frantically laying their feelings bare. le sigh.

i also like writers fixated on unreliable narration and what it entails (poe, hamsun, hesse), historiography (o'brien, ondaatje), memory/rendering (pinter), and the problem of the written "i" (hello, alice notley...). tied to this is my penchant for reading good personal letters (bukowski!) and artifacts detailing mundane existence (elizabeth smart's grocery lists and weekly menus come to mind).

right right now, i'm really into the german modernists (and post- and proto- modernists) and some of the weirder supposedly insane and "feminine" (whatever the fuck that can of worms entails...) writers. so it's robert walser, violette leduc, janet frame, christina stead, isak dinesan, emily prager, paul celan, heinrich von kleist, peter handke, that stuff. yum. but i've been returning to fluffy and old standbys too--still need to read gaitskill, carey, roth, and kipnis' new books, and more elizabeth mccracken and stephen dixon. i'm also returning to faulkner and it's making me very happy. and spurred by finally getting around to reading vidal and saramago and being totally amused and blown away, i've also got some of the more obvious and "fun" popular choices on my list again too--more calvino, marquez, naipaul, and berger for example.

elizabeth costello is the best book i've recently read. i'm primed to read disgrace now because of it...

i tend to find the obsession with japanese literature faddish and a little boring; me, i vastly prefer chinese literature as well as chinese culture and history in general. i know my library doesn't reflect this, but that's mainly because it's still surprisingly damned difficult to obtain reliable translations of chinese writing. i hope i'm slightly ahead of the curve and chinese stuff becomes trendy next so more work becomes readily available! i am however interested in post-war japan's identity crisis and the personal and social conflicts that ensue, but i find film's done a better job of exploring those themes in general (ozu's my favorite filmmaker). and yeah, i'll admit i'm an unabashed akutagawa and mishima groupie, mm...

oh, and i'm one of those weirdos really into good poetry (there isn't much, but when you find it it mops the floor with any other form, i think). favorites there include hopkins, issa, szymborska, mayakovsky, equi, sexton, notley, ashbery, komunyakaa, szporluk, celan, and stern, among others. i also like food writing (alice b. toklas, elizabeth david, brillat-savarin, perec, rosengarten, liebling, bourdain, lawson, wolfert, harrison), and i'm a theory whore (zizek is hottness; so's deleuze, bakhtin, bercovitch, sapir, gramsci, gadamer, wallerstein, haraway, geertz...).

my favorite "classics" are the plum in the golden vase, master tung's western chamber romance, germinal, and rabelais' gargantua and pantagruel.

favorite Difficult (in the lit-theory definition) literary documents include the story of an african farm with its many wtf elements and walter benjamin's entire life.

my favorite single comprehensive short story collection is women in their beds by gina berriault. she was an absolutely underrated master. i am being 100 percent unblinkingly serious when i say i think of her as america's answer to nabokov. yes, really.

currently reading mason and dixon, and loving it way more than i expected to (i don't dislike pynchon, but don't altogether believe the hype, either). it's been making me grin with all of its timely cult-ural allusions (mesmerites! yes!) and mentions of food, as well as the rapport between the two main figures. and i finally got around to ordering some books i've been wishing for for ages but was too lazy and broke to track down one by one used: bruno schulz's the sanitorium under the sign of the hour glass, more elizabeth david (is there nutmeg in the house?), katherine mansfield's notebooks, diane williams, yellow flowers in the antipodean room, on a dark night i left my silent house, a collection by nerval, and a collection of stories by ines arredondo. i want, badly, some christine brooke-rose, olive moore, raymond queneau, perec's la disparition, gilbert sorrentino, alberto moravia, robert bolano, more boris vian, and aurelie sheehan.

oh those school posters are right; reading is FUNdamental! haha, i'm a dork.

Om mitt bibliotekthe thought of actually completing this thing tires me to even consider, but maybe i'll start chipping away at it one of these days...i have a problem and will not allow myself into book stores anymore. i used to use wheelbarrows and minivans to cart my finds home, and my floor bows with the weight...old school powell's, library sale, and ABE -ers, represent!