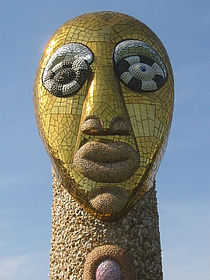 The photo image is a sculpture by Niki St. Phalle.

Om mitt bibliotekI'm maybe too obsessed with cataloging for my own good; the LC numbers in my collection are slightly unorthodox. For sorting purposes, there's a space between the alpha characters and the numericals; and I zero-fill to four digits before any decimal place. I've omitted any characters after the decimal place, since that's more information than I really need.
"Deacessioned" books are books of note that I once owned, but no longer do. (Often these have gone in the direction of Newberry Library: at least to their used book sale.)

I collect books by and about Edmund Wilson, books by and about Edward Abbey, and WPA State Guides.
The WPA Guides have not been completely cataloged yet. They're fun, but not an object of study, so I keep them "offsite" in my storage locker.
My collection of Wilson is nearly complete, the Abbey stuff less so.
While I still enjoy Abbey, I consider that interest to be adolescent. My interest in Wilson is somewhat more mature, but I've actually read only a few of them: "Patriotic Gore," "To the Finland Station," "Red, Black, Blond and Olive," "Memoirs of Hecate County," "I Thought of Daisy," "Europe without Baedeker". I've made a serious effort on "Wound and Bow," particularly since Philoctetes is an interest of mine. I've at least glanced at the others, but I wouldn't say I'd read them. Since my collection is more or less complete, I've moved these off-site.
I've also moved off-site my collection of catalogs of Art Chicago, and its predecessor, Chicago International Art Exposition. Technically, these are serials, not books, and therefore they should be treated differently. But these massive catalogs sure LOOK like books.