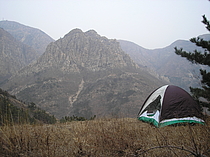 Om migI am Canadian-Chinese (Canadian citizen, but resident of China). I lead a somewhat nomadic life, never in one place for more than 2 or 3 years- a pattern continued from my childhood. So it makes it hard to collect and keep books (although I buy them anyways) and I usually end up giving away dozens whenever I move.

Om mitt bibliotekA college professor once told our class that our generation (Gen X) is "not very well-read". I took it as a personal challenge, and have set out to read as many 'classics' as I can. A decade later, I have read about a quarter of what is traditional termed the 'Western Canon'.
So this 'library' is actually a list of books I have read. Some of these books I have on my shelves, or in boxes in my parents' basement. I wish I could collect all of these books, and I wish I had a nice, big, oak-panelled room to house them in, but I don't. Thus my library is a mental, or virtual, one.