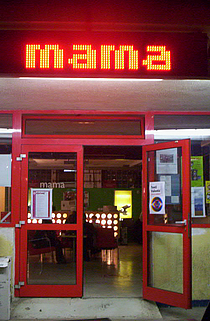 Multimedia Institute emerged in 1999 as a non-governmental spin-off from the Open Society Institute Croatia, and it is located at the centre of Zagreb, in the heart of the city’s cultural hub, to provide services and support to the vibrant cultural and technological communities in the respective domains, and beyond.

The goal of the Multimedia Institute is to promote and educate the public on media culture, socially inflected approaches to new technologies and the newest developments in social theory.

In the public eye, the work of mi2 is mostly seen through the activities of its public space and cultural centre - MaMa. Ever since it opened on May 14 2000, MaMa has been a meeting point for different communities ranging from political activists, media artists, electronic music makers, theorists, hackers and free software developers, gay and lesbian support groups, to the anime community. Guided by the ideals of sharing, it immediately offered young creators, independent cultural actors and civil initiatives, free access to both its facilities and its web infrastructure.

MaMa’s facilities have been important for the local indenpendent and alternative scene to emerge, but our activities were also very much shaped by the building of national and trans-national networks [like Clubture-network, a.network, iCommons etc.].

In the last couple of years Multimedia Institute and MaMa got prominently involved into the anti-gentrification struggle in Zagreb and Croatia, since the very basis of our activities - which is the existence of an (critical) public domain - is threatened by the neo-liberal policies deployed by a wide-range of different political and entrepreneurial actors.