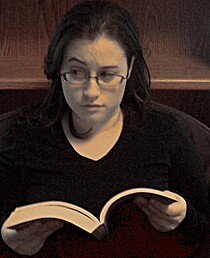 Om migI'm 23 years old and currently spending some time at home, taking it easy, as she recovers from brain and neck surgery. The surgery was a good thing, however, because it fixed the medical problems that had crippled me physically, socially, and mentally for the last six years. Once I'm through with my recuperation, the future's open wide. I hope to go back to college and take it from there.

Since my surgery, I've been reading more and faster than I had in a while. Hopefully my writing skills will return in a similar fashion, and one day my books will be listed on LibraryThing.

Om mitt bibliotekI'm also allthesedarnbooks. This library is my actual library, the books I currently have in my possession (at least the ones I've gotten around to cataloguing). When I have books out from the library, I do list them here, but when I return them, I delete them. The same goes for books I sell, trade, or give away.

On allthesedarnbooks, however, I keep a list of all the books I've actually READ since about 2004, including ones from the library or that I have since passed on. Basically, there are a lot of books on here that I own and haven't read, and on there that I've read and don't own. Now I'm confusing myself... sheesh.

I also use that one to occasionally participate in groups and write reviews.