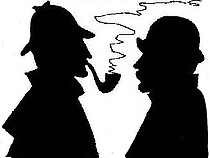 Om migI'm a semi-retired dermatologist with a variety of interests. LT-wise, I'm obviously a Sherlockian: I'm the founding webmistress for both the Adventuresses of Sherlock Holmes and the Beacon Society: Teaching Sherlock Holmes (BeaconSociety.com). And I was one of the early female Baker Street Irregulars. A few years ago I went back to school and did all the coursework for an MA in Theater (Directing); I'm a judge for the Suzi Bass Awards, Atlanta's equivalent of the Tony. I enjoy crafts and design and have way too many Hermes scarves. I have threeSwedish Vallhunds (thus all my dog training books; I'm a great fan of clicker training). I still teach one clinic a week at Grady Hospital in downtown Atlanta, but I gave away most of my medical books so I could have more shelf space... everything I seem to need is on Google anyway these days. Lately I'm amusing myself with listening to The Great Courses and taking Coursera MOOCs ranging from art to social psychology to historical fiction.

Om mitt bibliotekMy first LT project was cataloging the Sherlock Holmes collection of my late professor & mentor, Dr Ben Smith. I originally did it to make it easier for his widow to find a dealer, but after so much work I decided to buy the collection myself. I've now cataloged all my theater books (and trying to list all the plays in collections so I won't buy them twice). My next goal is to actually DO some of the things under the "hobby" tag in my book collection.

GrupperAll the World's a Stage, Baker Street and Beyond, Kindley Book Club, TinyCat