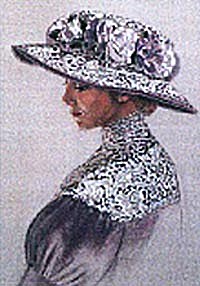 Om migI am a librarian with very broad interests and reading habits. Particularly attached to the 19th century in fiction and non-fiction. But I also love travel literature of all kinds, food history, cookbooks, cats (big and small), mysteries, espionage, history (Britain, British Empire, India, Russia, Central Asia and more), mythology, archaeology, Mesoamerica, gardens, wild places and the sea. I have travelled quite a bit already, but hardly made a dent in my list of 'must see' places. Next stop I hope will be 'Indochina'.

Om mitt bibliotekMy husband and I, between us, have somewhere between seven and eight thousand books. I haven't catalogued even a fraction yet! Besides the subjects I've already mentioned, we also have collections of books on medieval history, art (east and west), antiques, architecture, politics and current affairs, the environment, international development, economics, cosmology, natural history, thrillers, 'hard-boiled' & 'noir', The Classics, needlework, and travel guides. And that's just what I can remember off hand. I also have a growing collection of films on video and DVD, but I don't plan to catalogue them right away.