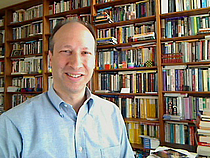 Om migOnce while I was teaching computer science at Seattle University, I asked a history professor if he had read all the books which lined his office walls (all four, floor to ceiling). His response: "Peter, would you buy a library in which you had already read all the books?" Another friend who teaches philosophy at Georgetown University commented on the size of her collection by noting that "one has to buy books out of self-defense anymore because they go out of print so fast." I mention these quips to friends who look at my own library a bit quizzically, and ask "Have you read all those books?"

When I'm not reading, I develop software and enjoy a lot of the outdoor activities the Northwest is known for, like hiking, sailing, skiing, kayaking, and especially rowing. I also play the clarinet and do a bit of photography.

Om mitt bibliotekI concentrated in mathematics in college and computer science in graduate school, so my collection reflects those long-term interests. I also have a lot of history and literature. I lived in Israel for a couple of years after college, which explains all the books of Israeli songs, poetry, novels, politics, and history. I wanted to understand how the situation there became so troubled, so when I returned to the States, I frequented the used bookshops around Harvard Square (which, alas, have largely disappeared) and picked up a modest selection of books about middle east history, including a few by Howard Sachar. I've also enjoyed reading Barbara Tuchman and Simon Schama, historians who, like Sachar, combine careful scholarship with narrative flair. In one of those same Harvard Square bookshops, I came across a set of Churchill's six-volume account of WWII, which is a marvel. Much harder to find is his earlier account of WWI (also six volumes). I found it, along with some of his war speeches, at a small bookshop in New Hampshire that specializes in Churchilliana. I have a nice collection of Martin Gardner's books on mathematical games and Raymond Smullyan's books on logic puzzles and Godel's theorem. Other well-represented authors include Milan Kundera, Vladimir Nabokov, Dostoyevsky, Tolstoy, Shaw, Mark Twain, Charles Dickens, Heinrich Boll, Vikram Seth, Ethan Canin, Calvin Trillin, and Rebecca Goldstein. The most unusual books I own are the artist books created by my mother, Enid Mark, published by the ELM Press. They are the rarest; each was printed in an edition of 40 or 50.