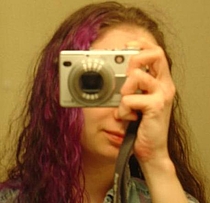 Om migOne day I will buy a house with a room I can make into a library and get built-in wall-to-wall shelves installed. Sigh.

Om mitt bibliotek"And the case even of private libraries is becoming, nay, has become, very serious for all who are possessed by the inexorable spirit of collection, but whose ardor is perplexed and qualified, or even baffled, by considerations springing from the balance-sheet."
-- William Ewart Gladstone, from On Books and the Housing of Them

This is the stuff I own (except for the things in the "read but unowned" collection, of course). Mostly I'm too lazy to rate it, but if it were terrible I'd have gotten rid of it. Because I weed my library regularly, if a book is still in here then consider it a vote of confidence.

Five (5) stars means I think everyone should read it, and support the authors (if alive) because those books are just so good. Any rating other than 5 stars should be considered neither reliable nor valid; I make them up without thinking too hard about them.

My wish list of books I want to own someday usually has over 50 books on it (not included here on LT). Since moving to a place with a great library system, I've also been reading tons of stuff from the library (not included on LT). I have over 140 ebooks that aren't on here, too.

I *try* to keep this thing up to date, but no promises.