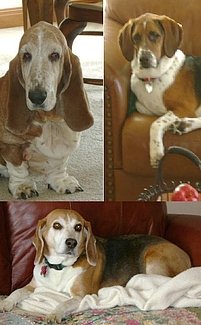 The picture on the left, by the way, is of Clancy, also known as the Clancemeister as well as several other pet (no pun intended) names. He also answered to "Your Majesty" (seriously).

Sadly, Clancy is no longer with us, having gone on to the Rainbow Bridge on Christmas morning, 2007, but he will live forever in the hearts of all who knew him. And as Babe Dahlgren had the task of taking over for Lou Gehrig, so does Travis (on the right) have the task of filling the hole left by the Meister's departure.

At the bottom is Molly, Clancy's "little sister," now Travis' "big sister" (by age). Unfortunately, Molly also left us last December, at the respectable age of 16 years, 9 months, and 21 days.

Om mitt bibliotekMy library has evolved over the years as have my interests and needs. The basic concentrations are science, languages, and history. There is still a lot of other things, lots of literature, and some of just about everything else.

For now, I am entering only paper books that I own. I'm guessing it will amount to somewhere between one and two thousand. I have digital copies of a lot of public domain books off the internet. Someday I may start entering them, as well as books that I've read, but no longer (or never did) own (I'm an incurable packrat, so that last category will be rather sparse anyway).