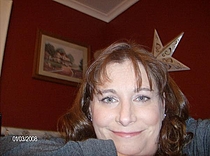 Om migI am a mother of three boys with two already grown up and have a nine year old. I have a lot of time to read because I can not work anymore because I have MS. I think reading helps me deal with my illness because it takes me away from my life and I am thrown into these books that are so intense and great that you can not but escape for awhile. I also would rather read the book then see most of the movies. I believe it really is hard to take a great book and duplicate it on the big screen and also hope that I will be as satisfied as I was with the book I think I am always disappointed.

Om mitt biblioteklibraryI had recently forgot how great reading is. TV was getting boring and decided to start a goal of 45 books to read for 2010. Little did I know that was not a big enough goal because I passed that goal half way through the year. Twilight was the series that showed me how much I loved to read but books by Melissa Marr and Carrie Jones and Suzanne Collins was authers who keep me coming back for me. I read everynight before bed an sometimes it is hard to stop lose a lot of sleep. I have the whole Alias series of books but have only read 4 of them. Have you ever loved something so much that you never wanted it to finish. Alias is that for me and even though I want to read them I know that is all that is left of the series and once I read all of them then it will be finally over for good. I love young reader books more than grown up books. A lot of these books are so intense that I don't know if i could have read them when I was a teenager. I also read grown up books and love James Patterson. I hope I never get to old to read the young readers because I have to admit I love reading them and not going to apologize for it.