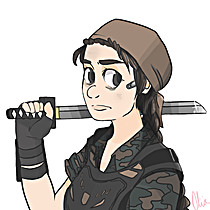 No cell phone. No iPod, iPad, Kindle, or anything else of that ilk. I write with a fountain pen, I'm a firm believer in old-fashioned, lo-tech paper books, and I love to read under the blankets with a flashlight.

I will read anything, and I do mean ANYTHING (yes, you are seeing Star Trek novelizations and Klingon versions of Shakespeare among my books). Well... I'll read anything except Hemingway. His choppy little sentences drive me berserk.

I don't read books from beginning-to-end. I just can't. Instead, I open to random spots each time I pick up a book; and, somehow, by the time I've covered all the pages, my brain manages to connect the dots to make a coherent whole. Can't for the life of me figure out how or why I do it. Anybody else have the same ability/curse?

Om mitt bibliotekWhat's listed here is only a fraction of what I actually own.

On my bookshelves are cookbooks by the bazillions, books in Welsh and Afrikaans (including all seven Harry Potter books in AFR -- rather a rarity these days, it seems), lots of volumes dealing with monasticism, all things maritime, military history, mercenary memoirs, and chaos magick, plus a smidge of this, a pinch of that, and a pile of other stuff. I suppose I could cram all my books onto a Kindle and regain 98% percent of the space in my studio flat, but getting rid of my 24 bookcases would leave the place looking empty and sad.

You'll see a bunch of books that will give away exactly where I stand in the current political climate. If you're on the opposite side, don't bother trolling me, because I won't answer.

Lot of Pirates of the Caribbean stuff, from junior novelizations (most of which are crap) to gorgeous art books. I'd list my PotC toys if I could, but they obviously don't count as books even though they take up just as much room!! My favorite is Captain Barbossa by a mile (Jack Sparrow is a jerk who couldn't find his head if it was stuck up his own a$$... which it frequently is).

Oh... and I'm an absolute sucker for Doctor Who, which will explain the ridiculous proliferation of Whovian volumes (including audio) among my other books. I've been on the Who-train since 1971; and, since everyone asks, "My Doctor" is always the one I'm watching or listening to at the moment. That being said, the one who most perfectly embodies him, IMHO, is a toss-up between the Eleventh — the incomparable, utterly brilliant Matt Smith — and the Twelfth, the too-fabulous-for-words Peter Capaldi. I can't wait to see what Jodie Whittaker brings to the role of the Thirteenth Doctor, because I think she'll be awesome. Gallifreyans can switch genders at regeneration — you need only remember the Corsair, Missy, and the General to know that — so quit complaining and get used to it.