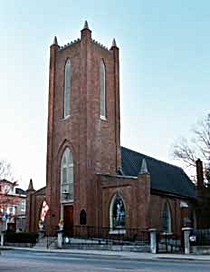 Om migSt. Paul’s Episcopal Church was founded on August 27, 1827 in a room of the Hiram Masonic Lodge #7 in Franklin, Tennessee. Those persons “friendly to the formation of an Episcopal church in the area” met under the leadership of Reverend James Hervey Otey—a man who not only started this “Mother Church of the Diocese of Tennessee” but was also instrumental in starting several other churches and educational institutions throughout the South, and who also would later become the Tennessee’s first Bishop.

The church edifice was not started until 1831 and when completed in 1834 it was called a “three-decker” building which included the nave, slave galleries, and undercroft with crypts for the Otey family (which subsequently were never used—they are buried at Ashwood Cemetery in Maury County.

During the War Between the States the town became occupied by the Federal Army and St. Paul’s became filled with soldiers who used the place as barracks for the next three years. The pews, altar and organ fueled the fire that burned under the bell tower which now served as a chimney stack. The interior columns were also damaged to build watering troughs for the horses and this evidence is still visible today. The fair linen became saddlecloths for the commanders’ horses. Fortunately, the altar silver and Parish Register were saved—but only because they had been buried in a cistern across the street.

Following the bloody Battle of Franklin on November 30, 1864, St. Paul’s was used as a hospital for wounded troops—first by the Federals and then later by the Confederates. When it was all over, nothing much more than the thick walls were left intact.

After the War, the church was used as a carpenter’s shop and a stable for horses. It was rat-infested in 1869 when plans were made to restore the sacred place. The roof was lowered as they removed the slave galleries and the bricks were used to build Founder’s Hall behind the church that was then a rectory for the priest and his family.

From 1902 to 1915, several memorials were donated by members of prominent families who had worshipped at St. Paul’s from its humble beginnings. Among those donations were eight stained glass windows created by Louis Comfort Tiffany.

In 1927 St. Paul’s celebrated its centennial with a major celebration.Church dignitaries and laymen from all over the nation came to attend the services and barbeque to follow. Following the depression, however, the church began to decline in membership and activity with little hope of recovery.

In the 1950’s St. Paul’s was almost non-functioning until an energetic priest named Bill Ray arrived, and the parish began a period of new growth which has continued to this day. There are now six weekly services with over one thousand members and three full time priests.