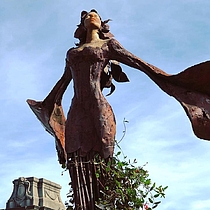 Om migWell, I think it's a given that like everybody on here, I like books. And reading. And just about anything that involves a combination of either of those. Yay books! And Doctor Who. I'm wild about Doctor Who. Oh, what I wouldn't give to hear the sound of the TARDIS in real life!

I live in Lansing MI with my dog, Sky, and my two kitties, Pride and Sophie. Sky is a new addition to our little household, and I'm not 100% certain the cats have forgiven me for bringing her home. They want nothing to do with her; she wants nothing more than to play with them... it makes for a slightly stressful living situation sometimes, but we make do.

I'm a graphic designer and I work for a small, independently owned telephone book publishing company as product manager and will be celebrating my 16th anniversary with the company in 2013! I think that's a fairly healthy achievement.

Om mitt bibliotekMy library grows at a far more accelerated rate than it is read. It seems that I either can't stop myself from going into the local bookstores on a regular basis, or can't stop myself from buying at least one volume while I'm there. Both scenarios seem to present a problem, as I live up the road from a Schuler Books, and my friends and I still frequent the local Barnes & Noble so much that the employees know us all by name (it's like Cheers!).

As mentioned, I buy more books than I can read at any given point, and for awhile tried to keep a stack of books by the bed of what I wanted to read next, but when that stack grew into three, I decided that might not be the best idea. Sometimes I think I need to reduce my library or at least buy less, but as my good friend Sarah says, "One can never have too many books."