"Many texts were written in a late stage of the ancient Egyptian language in a highly cursive script known as Demotic. In use from ca. 650 B.C. until the middle of the fifth century A.D., Demotic served as the medium for a wide variety of text types. These include “documentary” texts, such as business and legal documents, private letters and administrative inscriptions, and “literary” texts, including not only works of literature per se, for example, narrative texts and pieces of wisdom literature, but also religious and magical texts and scientific texts dealing with topics such as astronomy, mathematics, and medicine. Demotic texts thus not only provide important witnesses for the development of ancient Egyptian linguistic and paleographical traditions but also constitute an indispensable source for reconstructing the social, political, and cultural life of ancient Egypt during a fascinating period of its history." Oriental Institute of Chicago

Sounds like a fair assesment of the importance of Demotic writing for understanding later Egypt.

I find it hard to decipher. But I have to admit I never made much of an effort.

I recognize very few of the letters of Demotic, though the only sample of it that I have in books is copies of the Demotic on the Rosetta Stone trilingual. The Hieratic seems to have a more formal calligraphic style and a less rigid Hieratic style. There is also a script style which comes before the period Demotic was written, it has small forms at the tops of the letters with long vertical tails in this style, I think it is classified as an earlier Demotic writing, but it probably should be classified differently. Demotic is a script version of hieroglyphic writing, not as formal as Hieratic. Then there is the pen and ink sketchy form of Hieroglyphic writing which is sometimes found, that was used to indicate what hieroglyphs to carve, it was written first then the carvers or artists would go over the work in more detail; sometimes this sketchy hieroglyphic writing was used ink on plaster or stele.

Although the time periods of usage overlap, the general order of the Egyptian scripts is as follows:

One thing you see with most writing systems (most pronounced in the documentary hands), the script form starts out carefully written and gradually degenerates into an often, very messy (and unreadable) script over time. Though, if the writing system is in use for a very long period of time, the script periodically gets "reformed" and then degenerates again as time passes.

Demotic, especially from the later Ptolemaic and Roman Periods is very difficult to decipher. Late Roman Period Greek is equally difficult, and sometimes, even for an expert, it is a real challenge to distinguish the two scripts.

Below is a fragmentary example of Ptolemaic Perod Demotic. 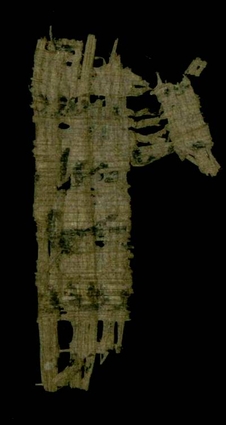